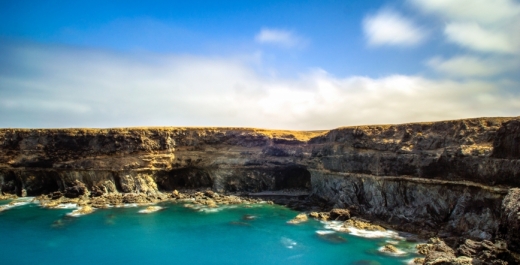 As I’ve repeated in our previous two instalments the “Gran Ruta” or GR-131 is longest hiking
trail in the Canary Islands, traversing most of the seven islands of the archipelago.
So, when we aren’t learning Spanish at our Spanish school in Fuerteventura, I recommend
you get off the beaten path and discover all the stages of this magnificent hiking trail. Today we
move towards the central part of the island, with stages 4 and 5:.

I introduced the GR-131, the Canary Island’s longest hiking trail, focusing on the Fuerteventura section of the trail. As I documented, Stage 1 of this section runs through the entirety of the neighboring islet of Lobos. Now I’ll talk about stages 2 and 3, the first two stages on the mainland. Enjoy:

The 4th stage of the Gran Ruta 131, passing through Fuerteventura, takes us from Tefía to the
Historic Village of Betancuria, a journey of just over 17 km.

We start this 4th stage at the chapel of San Augustine, in Tefía, down to the main road towards
Tefía for about 1 km, until the Eco-museum of La Alcogida. This museum recreates the life of a
traditional farming village of Fuerteventura and it includes the representation of some
ethnographic elements, customs and traditions of the island. We can also see traditional
majorero architecture. The name, Alcogida refers to a piece of land dedicated to the collection
rainwater.

From La Alcogida, we move towards the northwest to meet the peculiar Tefía windmill, which
has the distinction of having six blades, unlike most Fuerteventura mills, which have four.
From the mill we head south, turning left in order to cross the local road FV-221, towards the
Bermeja Mountain, which dominates the landscape due to its reddish color, and its pointy
profile.

The road continues southwest, towards the village of Los Llanos de la Concepción. To get to
the village we’ll first have to cross the Llano de Leme (Leme Plain). We follow the path until we
get to the next town, the Santa Inés Valley. The village of Santa Inés, was one of the earliest
settlements near Betancuria, thanks to its fertile land, suitable for cultivation.
We will access the village of Santa Ines through an asphalt road that continues on for about 1.5
km and then abandon it to turn left, on a dirt road. Once past the last houses of the Santa Inés
Valley we direct our steps to the viewpoint of Guise and Ayose, where we’ll find towering statues
of these two Majorero kings.

We then cross the local road FV-30 to begin a descent among various types of plants, including
tabaibas, acacias and some Canarian daisies, until we’re lead to the Franciscan convent of San
Buenaventura. We continue along Presidente Hormiga street for 300 metres and turn right, and, after another turn, we reach then a junction of roads that we’ll cross to reach the Plaza of the
Church of Santa Maria de Betancuria, which marks the end of this stage.

It’s not yet time to return to Spanish school… we still have one more stage to go for this
edition. The fifth stage of the GR-131 with a distance of just over 16 kilometers, takes us from
the Church of Santa Maria de Betancuria to the beautiful church of Our Lady of Regla, Pájara.

Beneficiados and descend about 150 meters through a cobblestone street, to the local road FV-
30, which we will cross to head towards the recently restored waterwheel of Pozo de los Peña.

We continue through a cultivation area, with topsails on both sides of the trail, which leads us to
the Morrete of Tegetuno. This path offers excellent views of the village of Betancuria. We then
ascend, continuously, guided by agaves, to Degollado del Marrubio or Degollada de la Villa.

Stage 5 then takes course southward into a reforestation area, where we find pines, wild olive
trees, acacias, almonds, carob, among other trees.

Futher on, we arrive at a rest area which has benches, tables, swings and an area for
barbecuing, known as Castillo Lara. From here we ascend via some stone steps that will take
us to the Casa de los Padrones. We then begin our descent to reach the vicinity of the Parra
Medina Hall of Nature. Then entire way we’ll be able to observe the locality of Vega de Rio
Palmas, towards which we are headed.

The road continues along the Barranco (Ravine) de Palomares and we ́ll follow it until we reach
a small tunnel, which we traverse in order to arrive at the Barranco de Rio Palmas, which will
continue for 1.5 km, past the village of Vega de Rio Palmas. While the path does not traverse
this village it’s best that we deviate slightly towards it, in order to visit the chapel of the Virgen de
la Peña, the patron saint of the island.

About 500 m further we’ll arrive at a bridge with several arches. At this point we leave the ravine
and turn right on the local road FV-323. to continue on the road along the Presa (Dam) de las
Peñitas. We move away from the dam and enter the Valley of the Granadillos. After a rise of
about one kilometer, crossing the local road FV-30 and continue up to the Degollada of

Once we get out of the ravine we enter the village of Toto, through Cuesta de San Antonio
street. We will pass by the Hermitage of San Antonio de Padua and will continue until the end of
the street to turn right and then follow the Barranco de Toto, through which we access Pajara,
where we will end our stage at the Plaza de la Iglesia de Nuetra Señora de Regla.