Day 3 – Diary of a Spanish & Surf student by Monica Gren 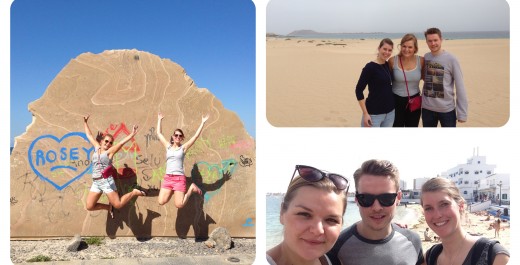 ” The story of how I met wonderful people during my experience in the island.”

So, I arrived to the Fuerteventura airport and was greeted by Jorge, the Spanish and Surf founder and language teacher, and another fellow student Steve from Scotland. Together we waited for Aline, a german girl, and then the whole northern European team was gathered – Equipo Norte as I started to call us. It turned out that the three of us were all going to be in the same spanish class and in the same surf group as well. This was super nice because we all got along really well. We even looked alike, having almost the same hair and eye-color. It was hilarious!

The drive from the airport to Corralejo takes about 40 minutes and we set of through the amazing landscape of red volcanoes, of marvelous coastlines, yellow sand dunes and turquoise waters. I was happy to notice that my fellow northerners were genuine, interesting and social people, and something that I noticed in general about the people who book a trip like this; going surfing and combining it with learning a new language, is that we were all pretty much on the same “wave length”. We all shared interests and views on life in general. Even though we came from different countries, had different backgrounds, educations and jobs, were of different age (most people in Casa Carmen were between 25-35 year old), we all wanted to spend time exploring, learning something new, experiencing and meeting new people. Another thing that almost all house mates had in common was that we traveled alone. This way you are forced to talk to strangers and perhaps step a little outside your comfort zone speaking other languages than your mother tongue, and after a while nobody is a stranger anymore. You form bonds with the people you meet and become a big family and nobody cares if you make grammar mistakes or pronounce things in a funny way.

And this happened already during the first days of the first week. Aline and I shared a room so we became very close, and together with Steve we had the same surf and spanish schedule. We became a little blond herd that went everywhere together like conjoint triplets… It was amusing!

God, I miss those lovely people…