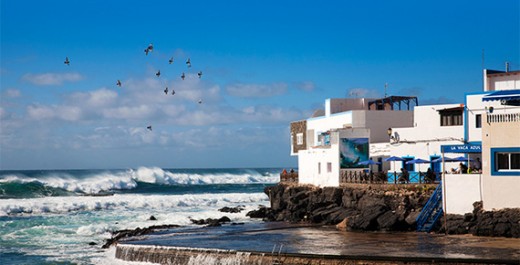 In Fuerteventura you will find nice quaint towns, such as Corralejo and El Cotillo … If you want to make the most of your visit here and get away from the typical mainstream tourism circuits, we have got here a handful of nice tips  that you should not miss in your next visit to the island. 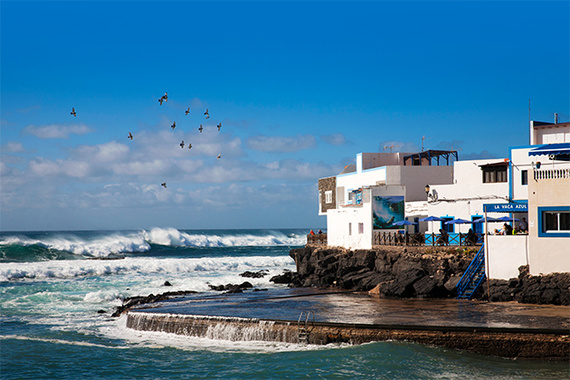 This is most likely one of the most unique places of the island. A sentence encourages us in our journey: “Viva la Virgen del Buen Viaje” [long live the Virgin of good journey], Patron of the town, who’s name can be read on the cliffs of the small harbour. Located in the northwest corner of Fuerteventura, El Cotillo is the ideal place to enjoy delicious fresh fish in any of the charming restaurants overlooking the ocean.

The contrast of its beaches, which are only a few miles apart, is appealing view for all visitors. Southward from the town, turning left into the entrance road, you’ll find a number of wild and attractive beaches: Piedra playa, Playa de la Escalera, Playa del Aljibe, Playa de la Cueva, Playa del Aguila and Playa de Esquinzo, are all located on steep cliffs and usually have a strong beach break.  These beaches, along with Flag beach in the East coast, are a Mecca for windsurfers and kite boarders of the island.

Before arriving to the above mentioned beaches you’ll encounter the Tostón tower, it is a wide and flat fortress , built in 1790 as the first line of defence against invading pirates. It is currently open to the public and usually has interesting paintings and photography on display, while offering a nice view from the roof, which, at sunset, is a unique spectacle.

In the opposite direction, heading north of Corralejo, we find another totally different landscape. Here the beaches are quiet and don’t have cliffs. Instead, one will encounter small lagoons that change to become beautiful tide pools among the reefs. The sand here is white, as opposed to the golden hue of the southern beaches, and the waves break well before reaching shore, thanks to outer reef formations. Further down this coastline stands the Tostón Lighthouse in the Bocayna, the channel that separates Fuerteventura from Lanzarote. This lighthouse, which recently became a Fishing Museum, is located in the north western part of the island, at a place known as the Whale tip. Here lies a vast shallow reef whose rocks have witnessed several ships running aground, even after the construction of the first lighthouse here, in 1897. 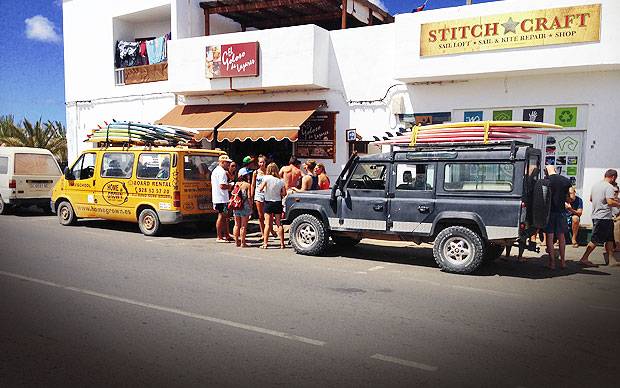 Halfway between Corralejo and El Cotillo this charming village demands a visit, whether to escape other tourist areas, visit the craft market on Saturdays, to do some trekking around its volcanoes, or just a stop along the way to eat and visit some of the art studios.

Another must-visit town is Lajares, a unique town, located in the interior of the island, it is the crossroads between beaches, volcanoes and the top surf spots in the north. On both sides of the main road there are shops, surf schools, surf like bars and restaurants. It also has a Canarian wrestling ring. In the south there are two windmills and the Church of Our Lady of the Miraculous, who is honoured in local celebrations (Las Fiestas).

We then arrive at Pájara, which has the Church of the Virgin de Regla, built in the 18th century, which holds among its various decorations an Aztec porch, as well as two large baroque altars to see on the inside. The influence for the Aztec designs comes its builders’ heritage, Spaniards who had returned after living in the lands of Mexico. The church is housed in a pleasant plaza shaded by large, leafy trees and surrounded by bars and good restaurants. 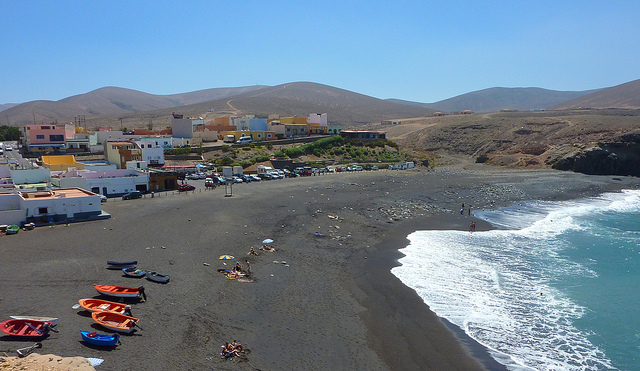 About 7 kilometers from the town of Pájara, and on the west coast, we find the small fishing village of Ajuy, located in Puerto de la Peña. There are several points of interest here, restaurants, the beach and the Caves of Ajuy. Here lies one of the best places of major geological interest in the Canary Islands, because you can see the oldest rocks in the archipelago. These rocks are the remains of ancient magma chambers from which expelled the lava that formed the islands over millions of years. Inside these caves, ships carrying goods and provisions for the islands would load and unload their cargo. These are accessed by a road that begins at the north of the beach, and after a short walk you will come to two gigantic interconnecting caves. We can also see an old lime kiln, fossilized dunes and a viewpoint that hangs over 20 meters above the sea. 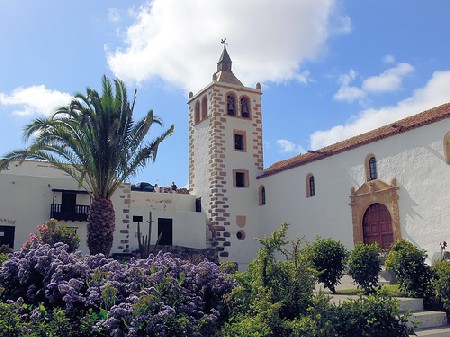 Founded in 1405 by the Norman conqueror, Jean de Bethencourt (hence the name of the town, this was the ancient capital, Betancuria). Despite its location in a valley it did not escape pirate attacks, in 1593, the pirate Jaban reduced everything, including the church of St. Mary, to rubble and ashes. Betancuria was the capital for some time, until people began to leave the town due to lack of fertile soil. In 1834 Betancuria’s status started to decline and handed the job to La Oliva, who in turn gave it to Puerto del Rosario.

The historic character of the Village determined the location of the Sacred Art Museum and the Museum of Archaeology and Ethnography, where you can admire pieces of great historical and artistic value, such as idols of fertility, a frieze discovered near La Oliva, and numerous agricultural implements. The island’s craft centre is next to the museum, documenting traditional arts and skills.

The Church of Santa María de Betancuria, now fully restored, houses the Museum of Sacred Art. Highlighted inside is the altarpiece from the second half of the 17th Century, rich Moorish crafts, especially that of the sacristy and the choir and Baptistery.

The Hermitage of San Diego and Conventural Church deserve a special mention, here you can still see the foundations of the former first Franciscan convent of the Canary Islands, where San Diego de Alcalá lived. Wrapped in an aura of history, these buildings exude the flavor of epic conquest.