So now that you’ve gotten to know why you should come and learn Spanish at our favorite island of Fuerteventura it’s time we talk about the next best thing: the other 6 fantastic islands!!

A journey through this wonderful archipelago will uncover just how unique each island is, each one a world of its own that offers a singular, breathtaking experience.

As I mentioned the Canary Islands are a volcanic archipelago of Spain located in the Atlantic Ocean, just off the southern coast of Morocco, in northern Africa and south west of the Spanish peninsula. It is comprised of 7 main islands and 6 islets.
It is one of Spain’s 17 autonomous communities and is divided in two provinces: the western islands belong to the province of Santa Cruz de Tenerife, which includes Tenerife, La Palma, El Hierro and La Gomera, while on the easter side we have the province of Las Palmas, with the islands of Gran Canaria, Lanzarote and, of course Fuerteventura! 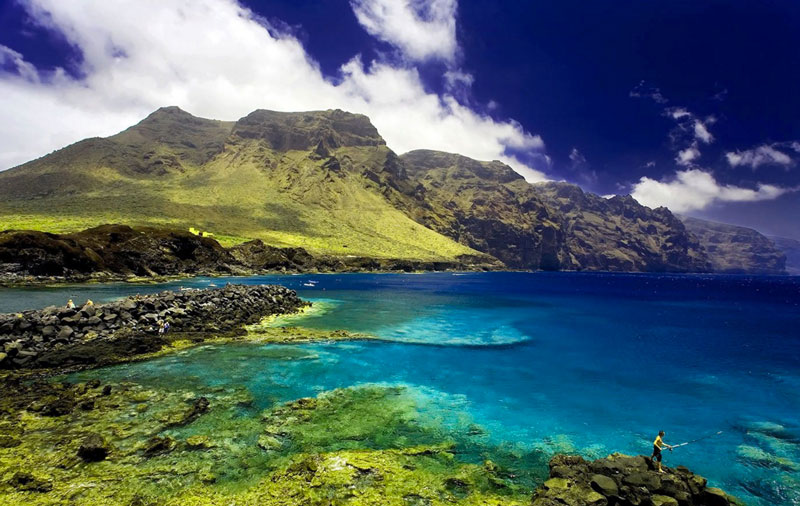 Tenerife is the largest island of the Canarian archipelago, with an extension of over 2000 km2 and a population of over 900.000 people. Its capital is Santa Cruz de Tenerife. The most populated municipalities on the island, apart from the capital, are San Cristobal de la Laguna and Arona. One of its most popular destinations is Puerto de la Cruz, a luscious oasis by the sea and the first large scale tourism destination in the Canary Islands. The main attraction in Tenerife is, without a doubt, its black sandy beaches, as well as (and my favorite) Spain’s highest mountain, the Teide; a dormant volcano that is a favorite among hikers. Climb to the top to discover the best views of the all the islands!

How to get there from Fuerteventura:
– Airplane with Binter Canarias airline. Approx. price for return flight: 30€
– Ferry. Approx. price per trip: 37€

Located in the very center of the Canarias, between Tenerife and Fuerteventura, the island of Gran Canaria has an area of over 1500 km2 and a population of over 800.000 people. Its capital is Las Palmas de Gran Canaria and it is the most populated city in the entire archipelago, with 380.000 people. What I love about this island is how diverse it is, which is why they call a “miniature continent”. In the winter you can enjoy a morning at the beach, behind the Sahara-esque sand dunes of Maspalomas, and later spend an evening amongst the snow after a 50 minute drive to the highest point of the island, where you’ll enjoy the breathtaking rock formations of Pico de las Nieves and Roque Nublo. In total, Gran Canaria boasts 33 of the 146 protected areas distributed among all the islands, including the valley-filled Natural Parks of Tamadaba and Pilancones, both of which also are favorites among hikers. The most visited municipalities of the island, besides its capital, are San Bartolomé de Tirajana and Mogán.

Along with Fuerteventura Lanzarote is one the earliest formed island in the Canarias. Its extension is over 800 km2 with approximately 140.000 inhabitants. Arrecife is its capital, which holds roughly half its population. In 1993 the entire island was declared an UNSECO Biosphere Reserve. For me Lanzarote is one the most stunning islands due to the violent volcanic activity it has endured. The National Park of Timanfaya is a mesmerizing wasteland, filled with volcanos, geysers and hiking trails so you can get lost in this Mars-esque wonder. Besides this you have a number of quaint little beaches and coves, imposing cliffs with spectacular views, and one of Spain’s best (but lesser-known) wine regions, La Geria.

With a little over 700 km2 and almost 90.000 inhabitants, La Palma, also known as “Isla Bonita” (Pretty Island), is also an UNESCO Biosphere Reserve. At over 2400 meters it is the second highest island after Tenerife. Its capital is Santa Cruz de La Palma. La Palma is the “greenest” island of the archipelago, filled with luscious vegetation, little white houses and the Caldera Taburiente National Park, an enormous and ancient volcano crater, which hikers love to climb and explore. My favorite part about La Palma is that it is Spain’s foremost stargazing destination and offers a number of astronomy related tours. The highest point of the island is Roque de los Muchachos where you’ll find one of the world’s premier astronomical observatories.

How to get there from Fuerteventura:
– Airplane with Binter Canarias airline. Approx. price: 31€ (layover in Tenerife or Gran Canaria) 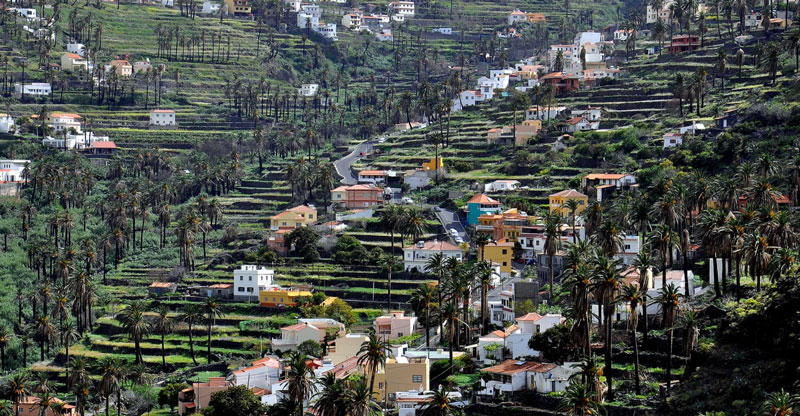 Because of its forest density La Gomera is the archipelago’s second least populated island, with a little over 20.000 people. It has an area of a little over 360 km2, and offers a beautiful forest landscape that attracts hiking enthusiasts from all over. The capital is San Sebastián de la Gomera, where half the population resides. One of the highlights of the island is Los Órganos Cliff, a famous stone wall made of narrow, precisely formed basalt pillars. A stunning sight to see!

How to get there from Fuerteventura:
– Airplane with Binter Canarias airline. Approx. price: 31€ (layover in Tenerife) 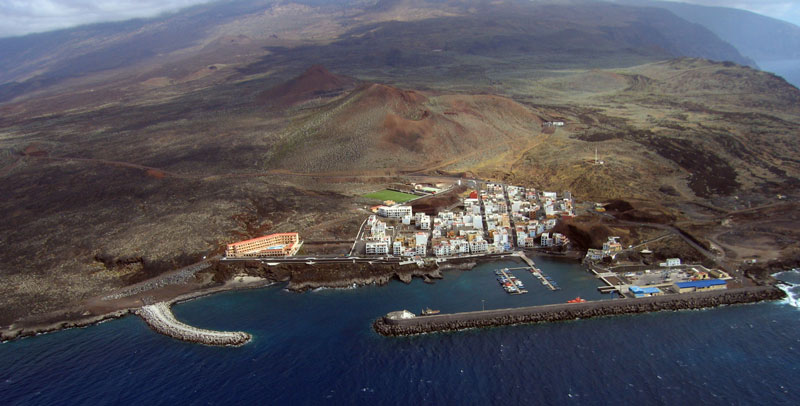 With an area of about 260 km2, the island of El Hierro is the smallest of the bunch and has the smallest population with only 10.000 inhabitants. As with Lanzarote and La Palma, El Hierro was declared a Biosphere Reserve in its entirety. The island is also known as the Meridian Island because it was considered the prime meridian or zero meridian and was used as a reference point on maps. Its capital is Valverde and some of its highlights include the Arbol Santo, a sacred tree to the island’s indigenous people and its endemic giant lizards. Personally, what I like is how virgin the island is; with hardly any construction throughout it… it almost feels like a trip to the past.

How to get there from Fuerteventura:
– Airplane with Binter Canarias airline. Approx. price: 37€ (layover in Tenerife or Gran Canaria)

So now that you’ve caught up on all the islands you have no excuse but to start planning your journey where you’ll discover magical places, and meet and speak with the locals, who are the warmest and most welcoming people, ideal for your quest to learn Spanish.