Day 1 – Diary of a Spanish & Surf student by Monica Gren 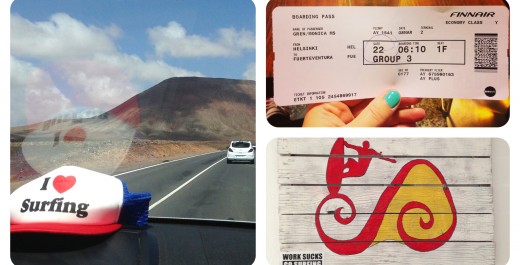 My experience of  how I found “Spanish & Surf School” in Fuerteventura and the story of how Social Networks helped me out to plan my trip.

It was the beginning of January 2015. I had just come home to Finland after two wonderful weeks spent in Jandia in the south of Fuerteventura, and somehow this rocky, sandy, dry and windy island had found its way straight into my heart. I wanted to go back.

So laying on the couch “instagramming” my Fuerteventura pictures there was suddenly a surf school that started to “like” all my pictures. Curious as I am, I clicked on the link in the surf school’s Instagram profile that led me to their website. On the website there was a package offer that hit my eye – combined spanish lessons and surf lessons. Perfect! I had long been thinking of taking up spanish studies again, and at the same time I had decided somewhat as a new years resolution that I needed to try something new that I had never done before. And come on – surfing – how cool isn’t that?!?

The next step was turning to the all mighty Google. I googled “spanish and surf lessons”. And to my surprise I found an actual company named Spanish and Surf that was located in Corralejo, on my newly found favourite island. Wow!

So, the economist and researcher I am, I thereafter turned to the reliable Tripadvisor where I read a lot of positive feedback from pleased travelers who had stayed at Casa Carmen (the accomodation of S&S) and done both spanish lessons and surf and experienced a wonderful time in this community. So this was basically enough confirmation for me to send the e-mail asking for a price offer for four weeks, and the rest is history…

March 8th, way to early for mankind to be awake, I jumped on the plane in Helsinki and crossed the European continent (and a bit of north Africa as well) and landed 6,5 hours later in this moon landscape on earth called Fuerteventura. I had no idea what to expect. I was totally outside my comfort zone. A month living with complete strangers, in a town I had never visited before, and doing a sport I had never ever tried before. But I wasn’t scared. I was happy. I was back.